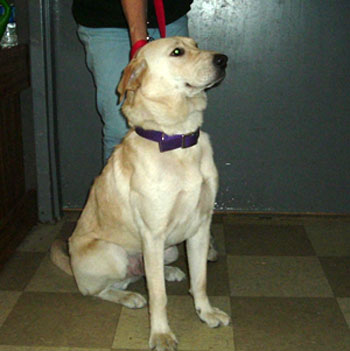 Buddy survived his first year of life as a stray in a wooded wetlands area at a local golf course. Trying to survive alone was tough - the winter of 2006 had him down to skin and bones and covered with stress-induced mange. Concerned residents and golf course staff tried to approach and befriend Buddy - without success.

They started leaving dog food and fresh water in areas that he frequented in the evenings. After some time, Buddy began to thrive and trust people. He became so friendly that he frequently followed the golfers around the course, knowing many of them would share their food with him and, sometimes, their affection. Unfortunately, Buddy still had large patches of mange and frightened some of the golfers and residents. Those who cared for Buddy all had dogs of their own and couldn't take him in. Inevitably, someone notified Animal Control of the situation and the concerned residents knew Buddy would be euthanized if he was caught. That is when WARM was called. Two of the ladies feeding and taking care of Buddy loaded him into a crate and brought him to WARM. There, Buddy was treated for his mange, for heart worms and was neutered. His mange cleared up and he turned into a handsome, healthy, energetic young man. Buddy had a very tough start in life being all alone, trying to survive. But Buddy got a lucky break he was befriended by people that cared about him and who brought him to WARM, where he would never be euthanized.

Once Buddy was healthy, he was taken to the WARM Adoption Center at Inlet Square Mall. Buddy was such a sweet, friendly, loving and playful dog that it didn't take long for him to find his new loving companion and forever home. Now Buddy will never have to worry about being alone, afraid or hungry ever again.